An important source of multiplicity is movement. Calvino writes

...what matters most is not the enclosure of the work within a harmonious figure, but the centrifugal force produced by it.

Taking a step away from the lectern, picture that force as choreographer Simone Forti described it:

I found that if I stepped very quickly round and round a small circle I could lean very steeply in towards its apex. Almost strangely so. And it seemed that I could isolate nearly all the effort to my legs, and that I could abandon most of my weight to a waving flame-like energy that seemed to be rising up the center of the vortex .... I was developing an interest in drawing circles, and was training my hand to the proportions of the seven circles which form the basis of the Star of David and of the Arabic numerals. In my dancing I was banking from orbit to orbit. 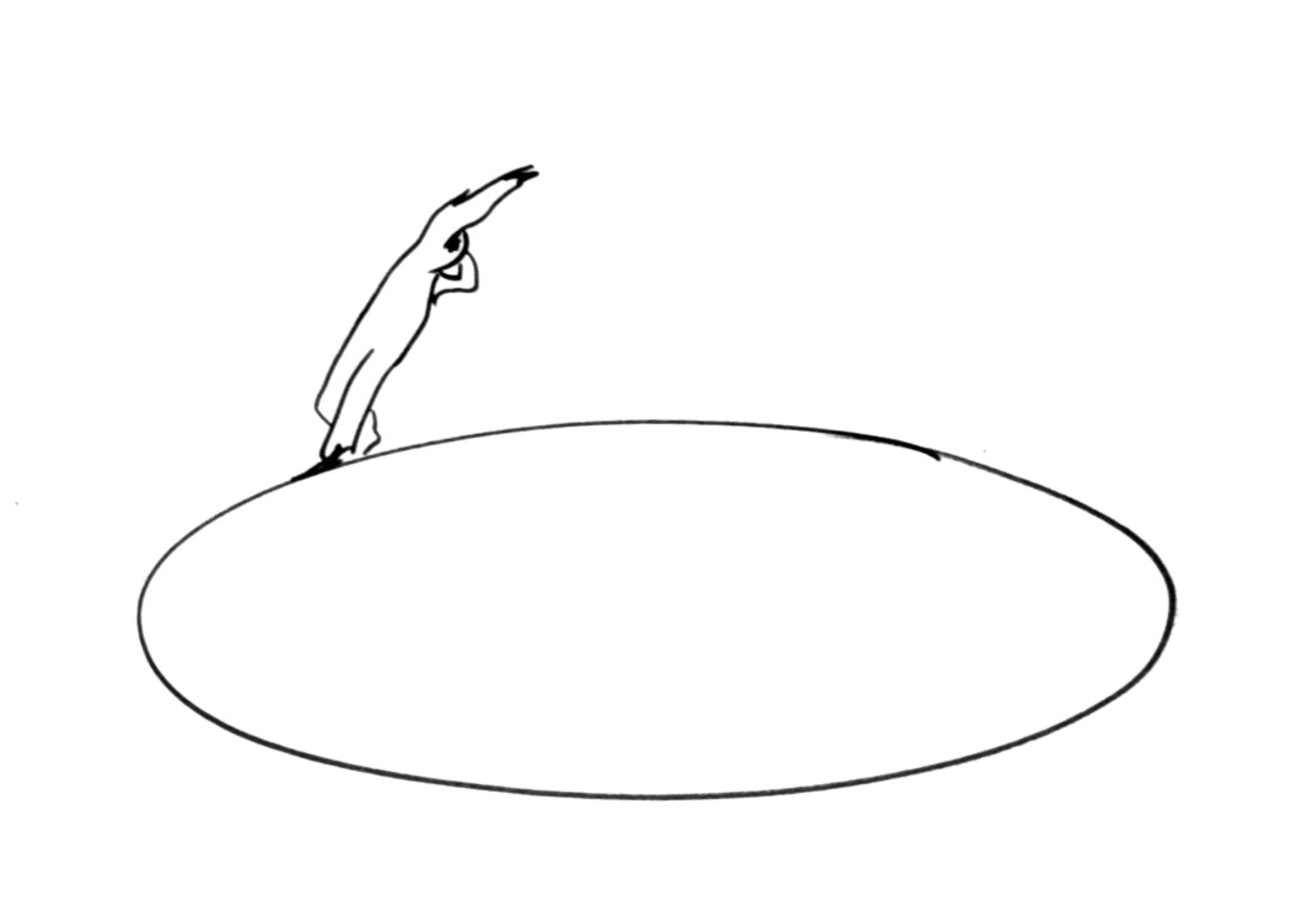 Forti attended technique classes with the most celebrated modern choreographers when she arrived in New York in 1959, but she was, by her own account, a lousy student. She wrote in her diary that she “couldn’t even perceive” what Martha Graham’s body was doing, let alone reproduce her movements. Merce Cunningham’s “adult, isolated articulation” was just as foreign. She had better luck the following year in a composition class offered at the Cunningham studio by musician Robert Dunn. He introduced her to compositional techniques of John Cage, who was the music director of Cunningham’s company. In a technique called Imperfections Overlay, Cage would trace any inconsistencies he found on the surface of a blank sheet of paper onto a transparency and then drop the transparency onto a grid. Once the “imperfections” were rationalized, they could be rendered, albeit imperfectly, as events in time and pitch. The scattered score could also become choreography.

In retrospect, I find that Imperfections Overlay, with its graph, was my first exposure to a still point of reference that gives a footing for a precise relationship to indeterminate systems. I had the feeling that the resultant piece would be a kind of ghost or trace of all the elements involved, including the original sheets of paper, and the air currents through which the plastic sheets had glided. It seemed to be a kind of notation whose interpretation by the performer would reawaken a partial presence of the original events.

This passage appears in Forti’s book Handbook in Motion: An Account of an Ongoing Personal Discourse and Its Manifestations in Dance. The book was my first exposure to a still point of reference for thinking about dance. Like Forti, I didn’t take a modern technique class until I was in my mid-20s, and I also found it perplexing. Less like Forti, I was at that time in dance class as a diversion from my graduate studies in mathematics. In Forti I find an understanding of movement that is at once enlightening, poetic, and often humorous. For example, she writes, “I saw a man in pajamas walk up to a tree, stop, regard it, and change his posture.” 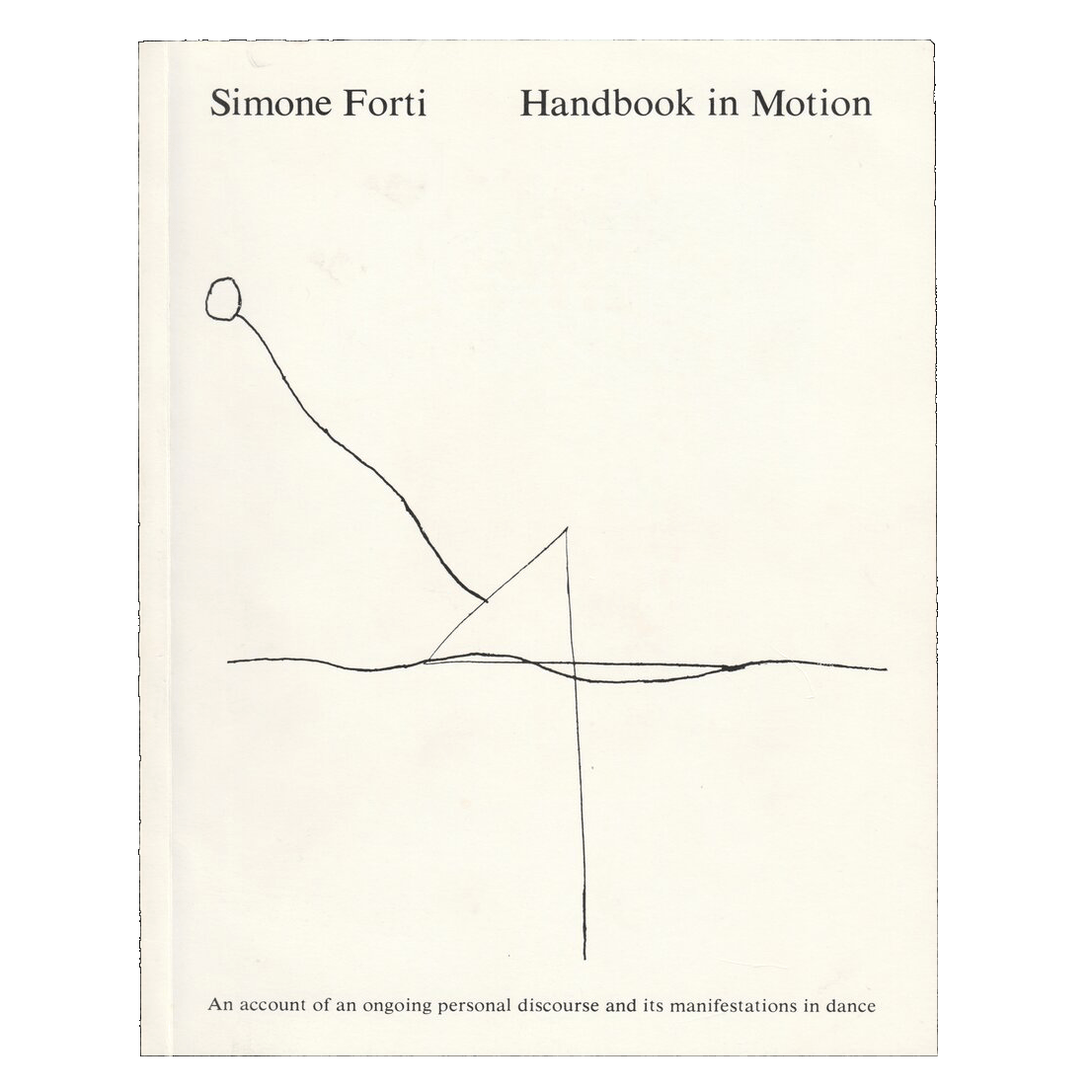 In addition to an observational acuity, Forti reveals habits of mind that in an admittedly self-serving way I have long held to exhibit a mathematical attitude. Some of these analytic tendencies are evident in the passage quoted above — at least in her choice of the words “precise,” “indeterminate systems,” and “elements.” Mathematical clues appear elsewhere in the Handbook in the form of drawings of numerals and circles. And then there is her enigmatic “proposal: 1 = pi.” She has described her early work as “more closed systems than not, arrived at by abstracting and reordering elements of one situation to create another which is of a new order.” One of these early works is Huddle, perhaps her most widely performed piece.

Huddle requires six or seven people standing very close together, facing each other ... One person detaches and begins to climb up the out­ side of the huddle ... He pulls himself up, calmly moves across the top of the huddle, and down the other side. He remains closely identified with the mass, resuming a place in the huddle ... Immediately, someone else is climbing ... The duration should be adequate for the viewers to observe it, walk around it, get a feel of it in its behavior. Ten minutes is good.

She called this and the other works from the same period dance constructions because she “saw them as being somewhere between sculpture and dance.” These constructions, attained through abstracting and reordering elements bring to mind the geometric constructions of the Elements of Euclid.

Umberto Eco, a contemporary and compatriot of Calvino, developed an aesthetic theory to account for works like Cage's and Forti's that are, by design, indeterminate. He called them open work:

They appeal to the initiative of the individual performer, and hence they offer themselves not as finite works which prescribe specific repetition along given structural coordinates but as "open" works, which are brought to their conclusion by the performer at the same times as he experiences them on an aesthetic plane.

The possibilities which the work's openness makes available always work within a given field of relations.